In less than eighty years the results of mankind’s technological advancements have created a vast and rapidly expanding web of electromagnetic frequencies (EMS’s) that now blanket the earth. Prior to the early 1900’s, none of these unnatural EMF’s existed. In the last few years much attention has been given to the negative effects of EMF’s on human health, but we also know that they have been found to be detrimental to plants, trees, animals, insects and beneficial bacteria.

Chromosomal Abnormalities – In 1956 it was discovered that short exposure to pulsed, 27 MHz radio frequency fields produced chromosomal abnormalities in the cells of the growing root tips of garlic plants.

Destruction of Soil Microbes – Recent German studies determined the configuration of pine needles and leaf veins of deciduous trees make them perfect antenna receivers for EMFs and their hydrogen molecules act as electrical conductors for EMFs at different frequencies. Frequencies in the microwave range act on soil, plant life and water. Minute electrical currents travel down a tree trunk or plant stem into the ground and enter the soil. This electrolytic process creates a type of acidification that effectively kills living microbes leaving the soil unable to sustain digestive processes, disease control and or structure water. These are very slow processes which may manifest themselves by increased insect or disease attack in specific species. Microbes are an important link in the food chain. Scientists speculate the destruction of microbes has disrupted the food chain causing a decline in certain insects and bird populations.

Dangerous Resonance Factor – Resonance is defined by Webster as The effect produced when the natural vibration frequency of a body is greatly amplified by reinforcing vibrations at the same or nearly the same frequency from another source, a Tuning fork effect – when a note is played the tuning fork also vibrates. When trees and plants are bombarded by EMFs the shorter the wavelength is, the closer the match will be to the physical structures of the trees or plants and the more damaging it becomes. The microwave band (1 to 40 GHz) matches almost perfectly with that of plant and tree cell membranes. These new frequencies are not pure, rather chaotic. So instead of increasing the plants’ resonance frequencies they produce dissonance – the opposite of resonance and the opposite of health. 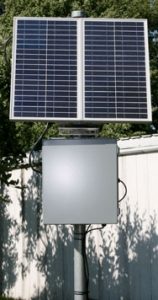 The Light Rhythms™ Symphony counteracts the negative effects of electromagnetic radiation produced by power lines, power stations, cellular phone towers and satellite radio protecting plants within its radius. It works on the principle of the Unified Field Theory to create organization and conformity within a system thereby creating stability and coherence resulting in health and longevity.

Frequencies manifest themselves in waveform patterns. As a waveform goes out from its source it climbs to higher and higher levels of excitation encountering distortion and losing information/energy thereby becoming chaotic. Its chaotic nature is responsible for much disruption of natural cycles and cellular functioning of trees, plants, wildlife and microbiology.

By exposing a waveform (frequency) to a sustained resonance of order (organization) the Symphony organizes the waveform at its source, causing a realignment of each level of excitation bringing it into sync with its source frequency. This coming-into-phase of each level establishes coherency and better conductivity in the waveform’s performance. Light Rhythms™ technology does not modify the frequency itself; it simply works as a guide to promote order and coherence.

Symphony and Trees – In 1997 Coherent Resources, Inc. began its first test on The Light Rhythms™ Symphony in a 1400-acre forest in North Idaho set aside by a foundation to study alternative forest management practices. As in many forests, there was a corridor cut through the trees to make room for power lines. On each side of the corridor, the trees were showing signs of disease and stress caused by electromagnetic pollution from the power lines. A solar powered Symphony was mounted onto a tall tree near the corridor in order to set up a field of coherence to counteract the negative effects of the power lines. The tree served as an antenna to amplify and broadcast the field of protection throughout the project area.

Within the first year the trees began to show signs of improved health beginning at the area of the antenna tree and gradually spreading along the corridor and deeper into the forest. The longer the unit remained in the forest, the further the Symphony’s field of coherency spread. After five years all the trees within the Symphony’s three mile radius had become healthy and vibrant and the only remaining sign of disturbance from man was the corridor of power lines itself.

Coherent Resources, Inc. has duplicated this experience in two distressed commercial apple orchards located beneath large power lines. To complicate matters, the fruit trees were trellised on wires which picked up static electricity from the power lines. Workers disliked being in these orchard blocks because the wires gave off nasty static electricity shocks when touched. Previously scheduled to be cut down because of disease and low yields, after one year with the Symphony both blocks became some of the growers’ most productive and healthy trees and remain so today.

Symphony and Wildlife – In addition to saving the ailing foundation trees the Symphony appeared to positively effect the wildlife – they seemed to be attracted to the coherence area. Prior to installation the foundation had been monitoring about 160 pair of deer, elk and moose within the 1400-acre reserve. In prior years the elk would range for many miles up into Canada. During the study the herd stayed in the foundations’ forest year round. By the end of the five-year study, the foundation reported they had counted at least 600 pair of deer, elk and moose. Additionally horses used by rangers to inspect the reserve would normally wait for the ranger to remount after inspection. Once the Symphony was installed they would run off and were found back in the protected area.

Note: Although additional similar and repeatable results have been produced, The Light Rhythms™ Symphony is intended and sold for experimental use only. Coherent Recourses, Inc. makes no claims or warranties, express or implied, with respect to The Light Rhythms™ Symphony.  Coherent Resources, Inc expressly excludes and disclaims any implied warranty of merchantability and any warranties of fitness for a  particular purpose, application or use.